Climate change is making the wetter parts of the world wetter and the drier parts drier. Predictions indicate that most middle and high latitudes will see even more intense winter precipitation and even more increased summer dryness. In a warmer world, weather events are more concentrated and intense, and the relatively dry periods between them become longer. And, according to both NASA (National Aeronautics and Space Administration) and NOAA (National Oceanic and Atmospheric Administration), it is getting warmer: 2015 was the warmest year on record: a rise of 1.0 degree Celsius (1.8 degrees Fahrenheit) since the late-19th century, and the 39th consecutive year that global temperatures were above average. As warmer temperatures increase the amount of moisture that evaporates from land and water, droughts become more common, severe, and impactful. The dependence of human health, animal health, and agriculture upon water supply is consequential.

Drought is both an agent and abettor of hard times. When 60 percent of the farms in the U.S. were experiencing drought during the summer of 2012, yields of corn and soy fell nearly 20 percent, affecting livestock production and impacting food prices worldwide. For developing nations that spend far more of their household incomes on food, even a small rise in grain cost can be significant. During the summer of 2014, regions of Northeast China, the nation’s “bread basket,” were suffering their worst drought in 63 years. Here, the economy of austerity reigned: corn and cattle had to be rationed and rationalized amid life-threatening water shortages.

Through my drought-tracking travels across the United States, Kenya, and China, I have witnessed the magnificence of water as a life force. Without rain, the bark beetle has penetrated the resin-less bark of lodgepole pines and killed huge swaths of forests in the North American Rocky Mountains; without rain, the overgrazed deserts of Inner Mongolia have not held moisture, and desert sands have crept over civilizations.

How do we possibly manage for drought? We can cut the dead trees that might fall onto hikers, or experiment with dryland farming or drought-resistant GMOs. We can make the daily decisions to use less water ourselves, more importantly, discourage production of objects that require lots of water, like cotton or beef or building a huge new home. But forces like weather are so unpredictable and vast, they seem much bigger than our science.

Whether in Illinois, Nevada, China, Argentina or Africa, all the drought-impacted farmers I have talked to seemed to have a brittle resiliency that was ready to crack. Without access to irrigation, which most small farmers around the world do not have, crops will fail. One farmer in Yunnan Province, China said he had already tried planting crops once that year (it was only June) and that he was going to try again. But since the early summer rains had not yet arrived, he was feeling doubtful. He sat gazing at his dried fields with an empty reservoir at his back.

Despite several El Niño storms in California at the beginning of 2016, the rain may not be enough to alleviate the worst drought in the state’s history. As Mike Anderson, California’s state climatologist, noted in a January newspaper article: “One week of rain doesn’t make up for four years of historic drought. We are in a very deep hole.”

As the California drought lingered on (in its third year when this photo was taken), many residents cut back on their water usage by taking shorter showers and not watering their lawns. But not everyone reduced their water usage leading some residents into “#drought-shaming” their neighbors on social media including on the Drought Shame app created especially for that purpose. 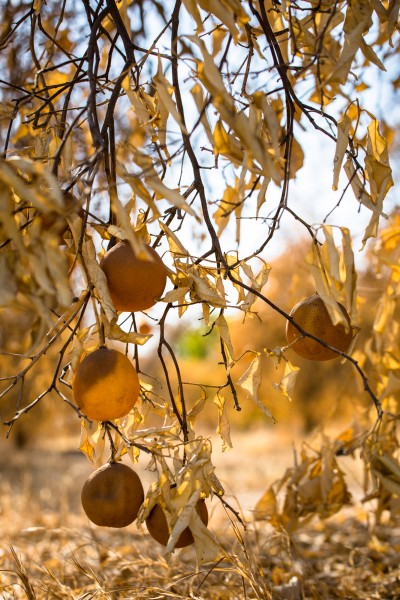 According to the U.S. Department of Agriculture (USDA), California ranks second to Florida in terms of citrus production but is the number one supplier for the fresh citrus market. Due to an antiquated and complicated system of water rights, legal access to water for irrigation is what made or broke many farms in the Central Valley during the ongoing drought.

The USDA states that California’s tree nut production is the largest in the nation, supplying nearly all U.S. almonds, walnuts, and pistachios. But since almonds are one of the most water-thirsty crops, (it takes a gallon of water to grow one almond) almond farmers became an easy target for scapegoating in a state where farmers use 80 percent of the state’s water for about 2 percent of its economic output. 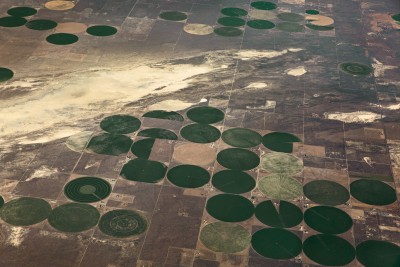 In October 2014, due to the reduced snowpack in the Sierra Mountains and the continuing drought, Lake Tahoe dropped below its natural rim of 6,223 feet above sea level. In January 2015, Governor Jerry Brown imposed mandatory cutbacks in water usage, declaring, “This is the new normal, and we’ll have to cope with it.” 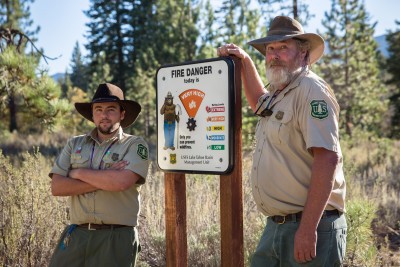 When I asked these forest rangers what they would miss most if climate change continues unabated, Ryan Meredith answered immediately, “skiing.” He added that in recent years the local ski season has shrunk from several months to just several weeks. 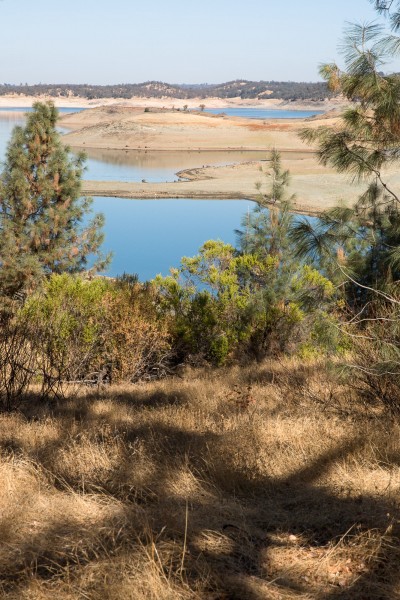 A year after this photo was taken the reservoir at Folsom Lake reached extremely low levels, dropping to just 17% capacity, a level not seen since the severe drought of 1977. The lake provides drinking water to hundreds of thousands of residents in the Sacramento region. The drop in the water level also took a toll on the number of visitors and park revenue: In July and August of 2015, the park took in $50,000 less than the previous year. 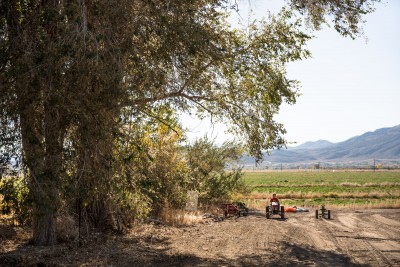 Tom Renner’s wife’s grandparents bought this farm in 1931. His grandson, Chandler, likes to help out around the farm, and Tom dreamed of one day passing the farm on to him. But if the drought continued, Tom wondered how much longer he could keep the farm going. 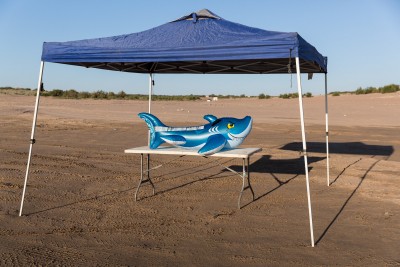 The ongoing drought conditions in the Southwest are not just affecting humans and agricultural production. With many lakes and rivers drying up, fish and other marine populations are threatened. The Elephant Butte Lake reservoir is located along the Rio Grande River, whose already endangered silvery minnow population has been further impacted by the drought despite a recovery plan that was enacted in 2009 to save the species.

When I visited this popular summer destination on Independence Day, I met several visitors who said they had never seen the lake’s water level so low (it was at about 7% capacity) and that attendance for the holiday weekend also seemed diminished. A recent economic development plan by the nearby city of Truth or Consequences noted that since continuing drops in the lake’s level could “threaten the long-term viability of the area as a tourist draw” they needed to “diversify the local economy” in order to be less reliant on the lake as source of revenue.

According to Bob Linke, an Illinois family farmer, the land around Champaign-Urbana is considered to be “class A” or some of the best in the world. But during the Central Plains drought in 2012, the quality of the land didn’t matter when there was so little rain to water the fields. 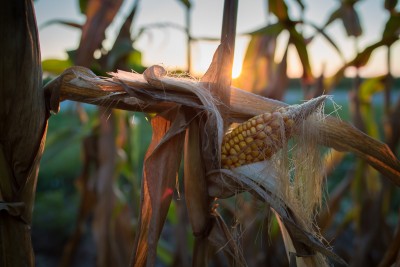 In September 2012, the US drought monitor map showed 65 percent of the United States was being affected by drought, the most widespread impact since the Dust Bowl eras of the 1930s and 1950s. 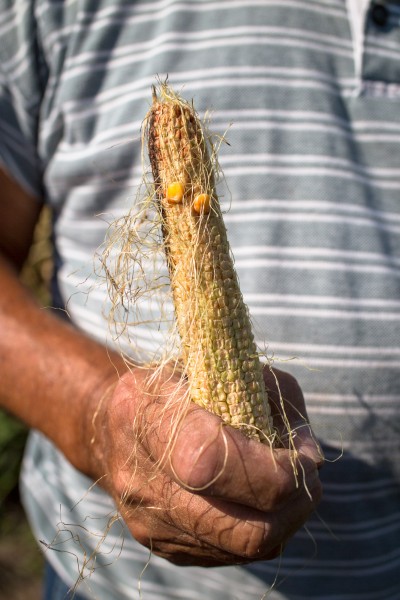 Several of the farmers I spoke with in Illinois in August, 2012 mentioned that their yields were so low that they planned to plow their fields over and would have to take whatever insurance money they could get for their failed crops. 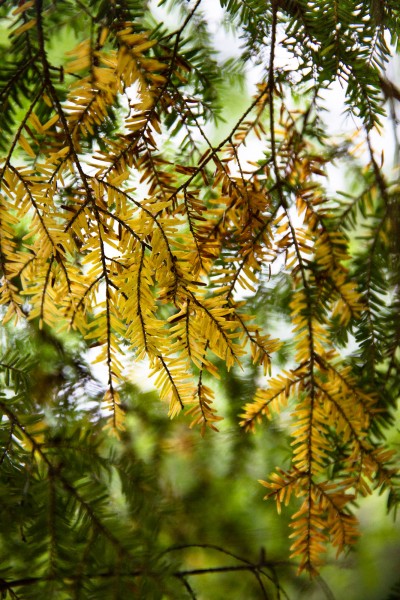 With average temperatures on the rise, so too, are populations of invasive insects such as the wooly adelgid, the bark beetle and the emerald ash bore. Historically, cold winters have kept these pests in check, but global warming will bring an increase in the range of these infestations as well as tree mortality. A University of Massachusetts study predicts that by the end of the century the entire Northeast U.S. could be infested by the wooly adelgid. 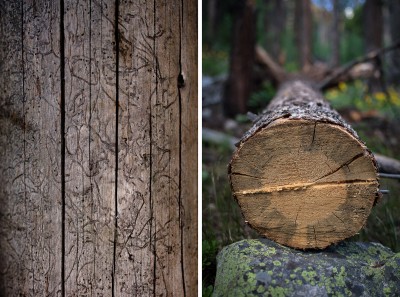 The meandering track marks and blue ring stain on the trunks of these lodgepole pine trees are the telltale signs of an infestation by the mountain pine beetle, a species of bark beetle about the size of a grain of sand. Affected trees are often cut down by the forest service to prevent them from falling on hikers, but there is little that can be done to stop the spread of the beetles in the open forest.

After the beetles kill the lodgepole pines, the dry dead timber can act like giant matchsticks and quickly catch fire as happened in Colorado Springs in the summer of 2012. Fewer living trees also means more landslides when heavy storms come such as evidenced in the heavy rains during the autumn of 2013. In Rocky Mountain National Park, these saplings were going to be burned to avoid further infestation by the beetles and possible wildfires. 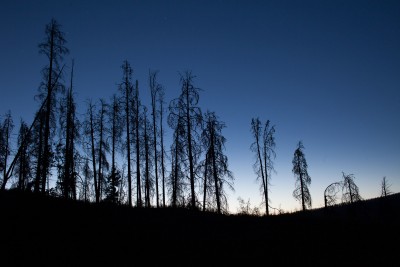 Over 4 million acres of lodge pole pines have been decimated in the Colorado Rockies by the bark beetle infestation and more than 60 million acres of forest in the US and British Columbia have been affected to varying degrees. Years of drought and warming winters have helped set the stage for this epidemic for which there is no known treatment.

A study released in the February 2015 journal Science Advances reports that in the second half of this century climate change is expected to increase drought severity in the Southwest. The study states these “drying trends are driven primarily by the forced response to increased greenhouse gas concentrations rather than by any fundamental shift in ocean-atmosphere dynamics.”

The Bastrop fire came on the heels of the worst year of drought since the 1950’s, the lowest amount of rainfall since 1895, and record setting summer temperatures. Despite idyllic street names such as Peace Haven and Kingdom Path Lane, there was little to soothe the minds and hearts of the over 1,600 families who lost their homes to the wildfires in this small town east of Austin Texas. 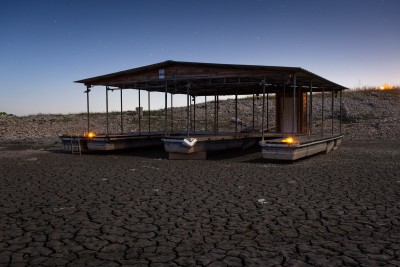 When this photo was taken in October 2011, Texas was already in its third year of one of the worst droughts in its history. Record setting temperatures in July and August and record lows for precipitation (only 2.44 inches for the summer) led some climate experts to describe the conditions as a “slow-motion disaster.” 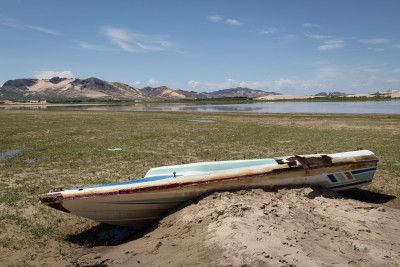 One of the most serene places I visited was Inner Mongolia, an autonomous region in northeast China. The quiet broad expanses of empty sky and land were a welcome respite for my eyes after the crowds and pollution of Beijing. But visiting here was bittersweet. The area is turning into desert as the effects of drought are sweeping through the region bringing sands from the Gobi desert that are replacing lakes and pasturelands. 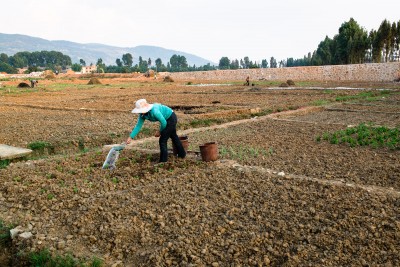 Like many small farmers around the world, those in this village in Yunnan rely predominately on rain water to water their crops. But with reservoirs and rivers dried up, farmers were hard-pressed to find any water for their crops. 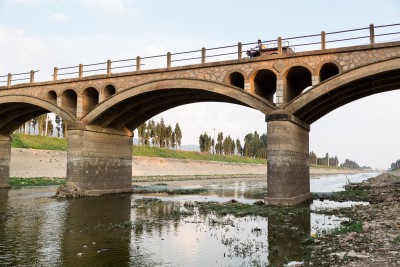 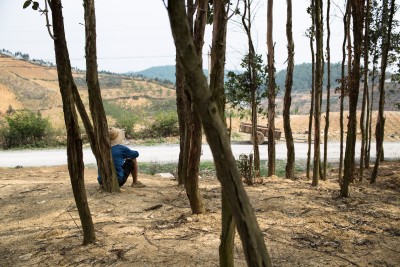 This farmer said he had already planted his crops once that summer but they had failed. Since it had not rained in months, he was contemplating whether it made sense to try planting again as his reservoir was dry and he had no other way to water the land.