In The Big Burn, Timothy Egan describes the “Great Fire” of 1910 that ripped through the Bitterroot Mountains of Montana: “Before the hour passed, big evergreens groaned at the waist and twigs snapped off … This was a peek beyond the gates of Hell.” Throughout the intervening century, fire activity has only intensified. When drought-stricken trees can’t access moisture through their roots, when pine beetles eat away at a tree’s hydration system, and when increasing temperatures cook their limbs dry, trees are prone to burn. In 2006, 100,000 fires were reported in the U.S., scalding nearly 10 million acres (4 million hectacres) – both record amounts. If trees burn, their carbon-absorbing powers reverse, and their stores of CO2 are released into the air, thereby intensifying the effects of climate change.

One of the places I traveled was southern Texas, in 2011, after the worst wildfire in the state’s history. Over 30,000 acres (12,000 hectacres) were destroyed during the three-week burn, which claimed two lives and over 1,500 homes. As I walked among the remains, there were no sounds – no birds calling, no insects buzzing, no squirrels scampering among the charred-out car parts melted into lawns. It was deathly quiet.

Started by a lightning strike, the Diego Fire burned over 3,600 acres (1,500 hectares) in the Santa Fe National Forest. Portions of the forest, like that shown in this image, had already been burned by the state’s second worst fire, the 2011 Las Conchas Fire, and not yet had a chance to recover. 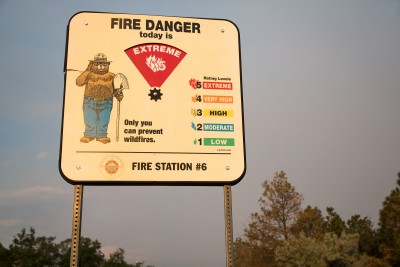 A 2015 report by the United States Department of Agriculture notes that climate change has led to fire seasons that are 78 days longer than they were in 1960. Twice as many acres are burned in the U.S. as compared to the 1980’s and scientists from the U.S. Forest Service believe that number may again double by 2050. According to the National Fire Interagency, more than 9,100,000 acres (3.7 million hectares) burned in the U.S. in 2015 making it the fifth year (since 2006) to have topped over 9 million acres. 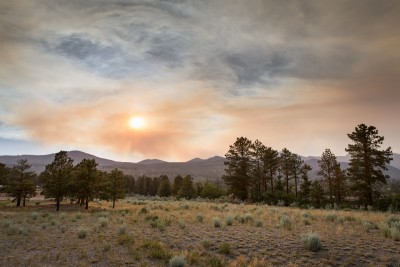 The Los Alamos vicinity has been affected by several serious wildfires in recent decades – including the Cerro Grande Fire that took homes from over 400 families and burned buildings at Los Alamos National Laboratory. After the 2011 Las Conchas wildfire, the Laboratory’s scientists studied the impact of carbonaceous “tar balls” in the wildfire’s smoke – determining that these particles contribute to the warming effects of climate change more than previously thought. 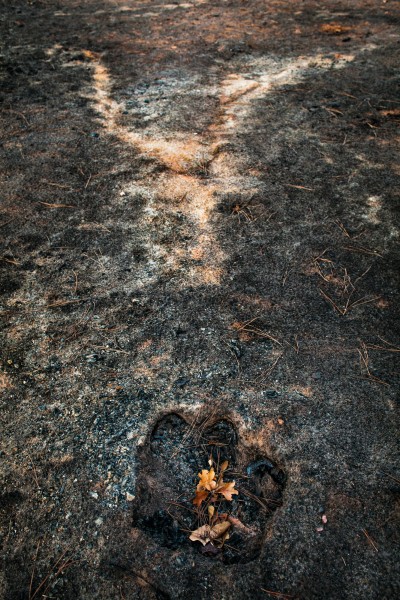 In September 2011, The Bastrop County Complex wildfire spread over 34,000 acres (13,800 hectares) in this small community east of Austin. Two lives were claimed by the state’s most destructive wildfire that occurred during the worst drought in Texas since the 1950’s. Stump holes are produced when tree stump has burned down all the way into the ground. 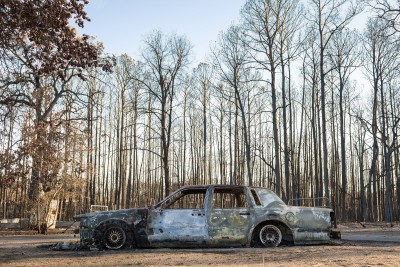 As I wandered around what used to be wooded neighborhoods there was a noticeable eeriness. It was not just the missing homes and charred trees and cars, but the stark quiet that unsettled me. So many of the places I have photographed for this project have inspired me with their lingering beauty. But here, I was just saddened by the sense of loss. 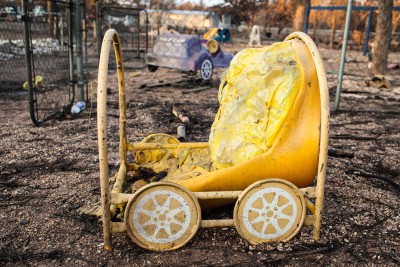 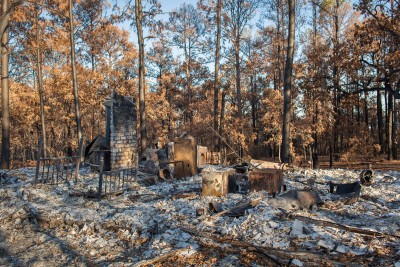 Over 1,600 homes were destroyed in the wildfires that burned for over a month in East Bastrop. Record low rainfall, record high temperatures, and high winds from tropical storms exacerbated the already existing drought conditions that helped to fuel the fire that was sparked by trees being knocked onto power lines.

Accidentally started by campers, the Wallow Fire in this forest burned for over six weeks before it could be contained. Grass-seed pods, dropped from helicopters soon after the fire ended, helped to quickly bring some new growth to the area, but it will take decades for areas with severe burn to recover. 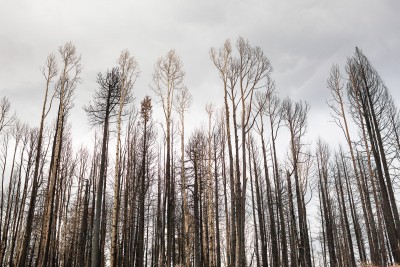 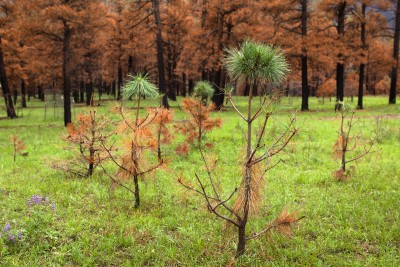 The Wallow Fire destroyed over 500,000 acres (200,000 hectares), making it the largest wildfire in recorded Arizona history. The tops of these saplings were amazingly not scorched, but since their cambium (a formative cellular layer) was likely damaged, they will not survive despite their hopeful-looking green tops. 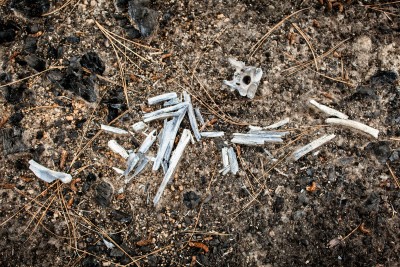 Coming after a five-year drought, the 2003 fire season was the worst in the park’s history. Over 136,000 acres of wilderness were burned, more than 13 percent of the preserve’s one million acres. Thankfully there were no human deaths from this fire that cost more than $68 million. 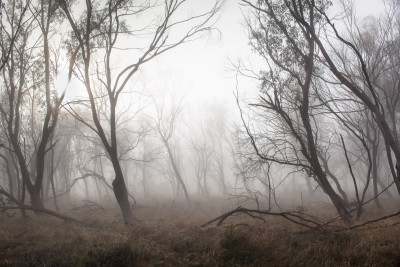 More frequent heat waves, droughts, decreased relative humidity, and a longer fire season in Australia have been linked to changes in the climate. For the period from 1973-2010, annual extreme fire weather has greatly increased at all seven weather stations in New South Wales and the same study showed that at 24 of 38 stations across the country reported significant increases in such weather patterns. 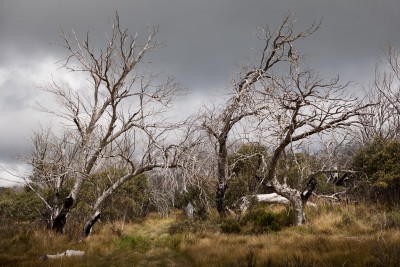 These trees in the Australian Alps National Park were damaged in a 2003 fire; nearly ten years later, much of the vegetation has yet to recover. In 2013, Australia’s Bureau of Meteorology added a new color to its heat index map, an incandescent purple, to indicate temperatures over 125 degrees Fahrenheit (52 Celsius) as it prepares for continued warming temperatures in the coming years.

In addition to increasing temperatures, another concern in the Australian Alps is the diminishing amount of winter precipitation. A 2011 federal report predicts that if temperatures continue to warm between 1.08 and 5.22 degrees Fahrenheit (.6 and 2.9 degrees Celsius) by 2050, there may be little to no snowfall in the “The Snowies”, as the Alps are affectionately known. This change will impact water resources, vegetation, wildlife, and winter tourism. 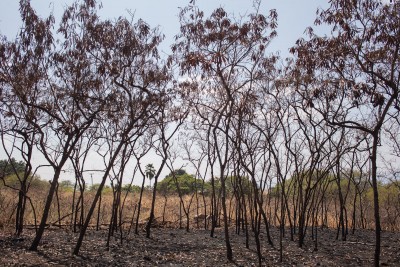 This fire happened only four days before I visited “The Big Island” of Hawai’i and when I arrived, I smelled the still-lingering smoke before I saw the damage to the parched landscape. In a cruel twist of fate, the eastern side of the island had recently received more than twice its usual rainfall over the past few months. 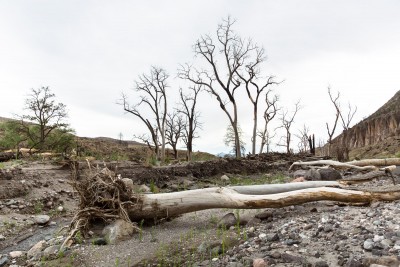 Fueled by high temperatures, dry conditions, and strong winds, the Las Conchas fire spread incredibly fast – averaging an acre of forest every 1.17 seconds during the first 14 hours. After burning for more than a month, the fire was eventually contained having consumed 156,000 acres (63,000 hectares) and 63 homes. The Dixon family orchard, a favorite apple-picking spot for seven decades was hit first by this fire and then a month later by flash flooding after heavy rains which wiped out most of the rest of the buildings and trees on the property.

This is one of several Witness Tree images that fits into more than one chapter portfolio of this project. Many environments are being damaged by a one-two punch: fire and flooding, heat wave then fire, drought and flooding etc. –underscoring the extreme and unpredictable nature of our changing climate.