There are two kinds of images involved with this project: the photographs I took while travelling to both near and far away places, and the ones I see when I close my eyes and remember. I keep thinking of how sad I felt walking around The Far Rockaways, Staten Island, or Sea Breeze, New Jersey after Hurricane Sandy and seeing dozens of homes with their sides ripped off – personal items exposed for all to see – or how bleak things seemed finding a herd of emaciated cattle standing against the advancing desert of Inner Mongolia.

But I began this project with hope and that’s the way it remains. It has to. Jane Goodall reminds us of the alternative:

We have the choice to use the gift of our life to make the word a better place – or not to bother. The greatest danger to our future is apathy. Only if we understand, can we care. Only if we care, we will help. Only if we help, we shall be saved.

As much as I want people to see what News words look like in real space – “desertification,” “sea level rise,” “retreating glaciers ” – I’m more interested in coaxing a connection among them that is older and bigger than they are. On the surface, it seems that only sweeping polices, levied with the sobriety of tax codes, can generate meaningful reform. But lately, I’m not so convinced.

I met a woman in Nairobi, for instance, collecting discarded plastic bags that had ended up in the river. After cleaning them, she would sell them to brokers who then resell them to local artisans who upcycle the bags into new products such as handbags and hats. I was inspired by her environmental and entrepreneurial actions.

Against the daunting problems we have constructed for ourselves, it sounds so trite to say ‘the solution is within you.’ But what other way is there? How can change happen without conviction? The solution actually is within you… when you ride your bike to work, when you drop off your compost at the farmer’s market, when you see the pink flash of a child’s balloon still stuck in the tree, when you arise to touch the sun, noticing how your fingers alter the light. 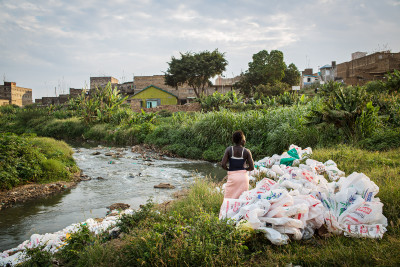 This woman regularly collects discarded plastic bags around her community near the Nairobi River. After cleaning them, she sells the bags to brokers who then sell them to artisans who upcycle the bags by crocheting products such as handbags and hats. Since plastic bags are made from petroleum, this woman is not only reducing her community’s carbon footprint by reusing existing bags, but she is also cleaning up her neighborhood and creating income for herself and a chain of others. 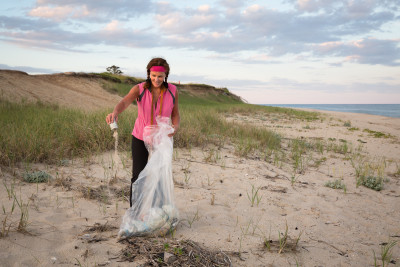 This resident told me that whenever she comes to the beach to walk her dog she always brings a bag to clean up garbage that has been left behind or washed up on the shore. Like the woman in Nairobi repurposing plastic bags, I was encouraged by her personal efforts to do something for her local community. 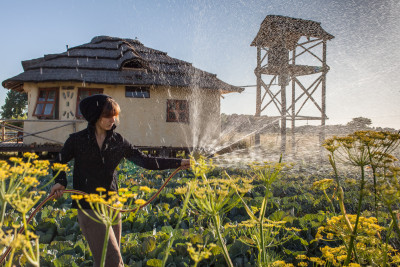 The Eco Yoga Park, an hour outside Buenos Aires, doubles as an organic farm. Volunteers like Larissa from Stuttgart, Germany, not only get to stretch their bodies with daily yoga classes, but also learn about permaculture as they help grow 80-90 percent of the food that is consumed there. In 2010, Argentina was hit by severe drought, drastically reducing crop yields. But the farm at Eco Yoga Park fared better because of its staff’s dedication to permaculture farming techniques. 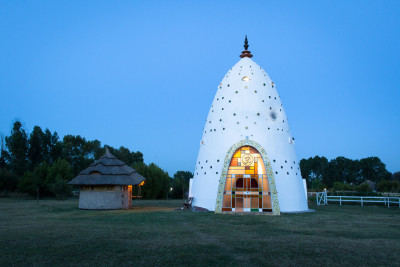 People come from around the world to visit and volunteer at Eco Yoga Park. Established in 1996, it is part of a large international chain of ecological villages. Volunteers work for approximately four hours a day in activities such as organic gardening, vegetarian cooking, and eco-building. 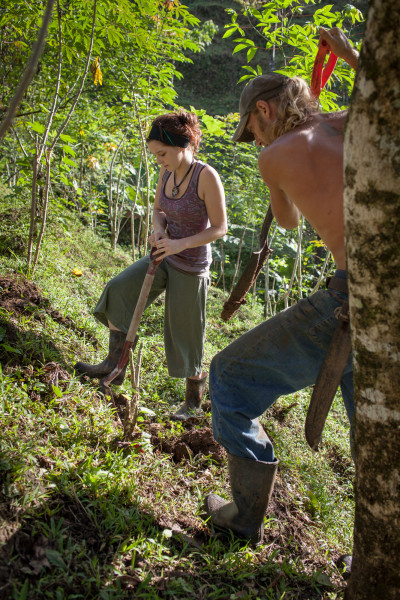 The residents at VerdEnergia, a cooperative community in the mountains of central Costa Rica, grow most of their food using permaculture-farming techniques. What they can’t grow they try to buy from their neighbors to support the local economy and to keep their carbon footprint as low as possible. 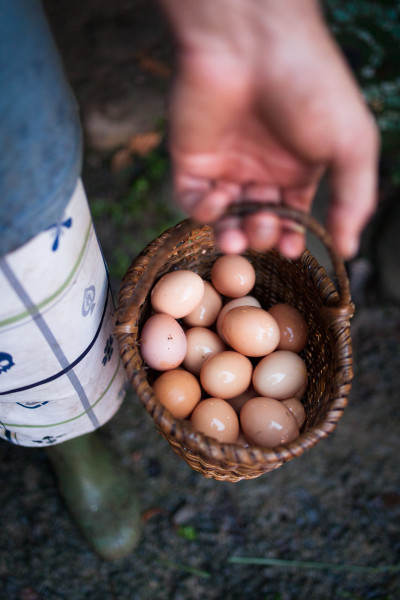 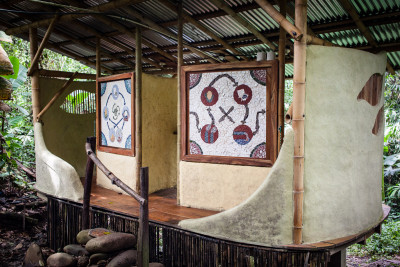 This two-stall biodigestor toilet turns human waste into fuel. The resulting gas is used to power a small burner in the kitchen of the main house at the Mastatal campus. 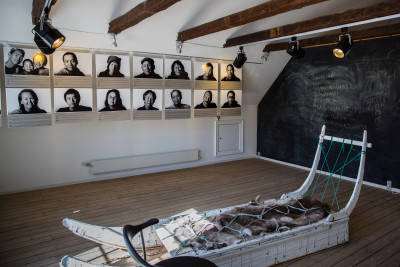 This exhibit by photographer Jørgen Chemnitz featured portraits of residents of Ilulissat with statements by the subjects regarding their concerns about climate change. The caption under a portrait of a young boy stated, “I know nothing about global warming, but I do not understand why there are puddles instead of snow when the Christmas tree lights up.” 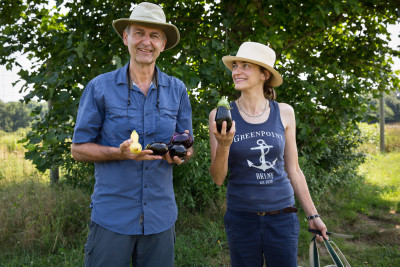 Gordian is a member in the Quail Hill Farm Community Supported Agriculture (CSA) program. During the summer, members come twice a week to harvest the produce that is ripe and ready for eating. 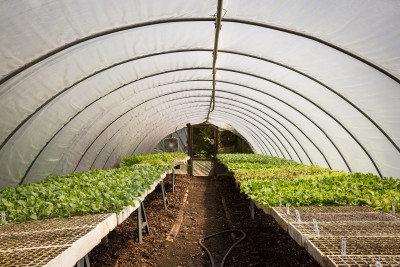 With more than 30 acres of organic produce serving over 250 families this CSA is a stewardship project of the Peconic Land Trust whose mission is to “to ensure the protection of Long Island’s working farms, natural lands, and heritage.” In 1986 there were just two CSAs in the United States but as of 2016 there are over 6,000. 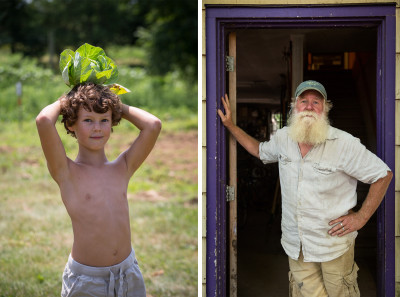 Quail Hill appeals to farmers of all generations. I met Julian, one of the youngest members, as he was playing in the fields while harvesting vegetables with his mother. Scott Chasky, Quail Hill’s director, has been with the CSA farm since its inception in 1990s. A poet as well as a farmer, Scott, has been described as “the spiritual father of the community farming movement”. 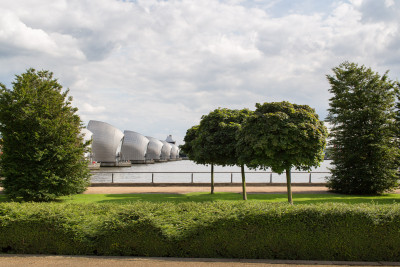 The disastrous North Sea flood of 1953 that took the lives of over 2000 people was the catalyst for the building of the Thames Barrier. As of February 2016, the barrier has been closed 176 times since it became operational in 1982, preventing both tidal and river flooding. Since sea levels are continuing to rise and the Thames Barrier is expected to reach the end of its design lifespan in the next fifty years, the British Met Office established the Thames Estuary 2100 project to provide research and advice to protect from “flooding or other serious water hazards that could result from climate change…now and into the next century.” 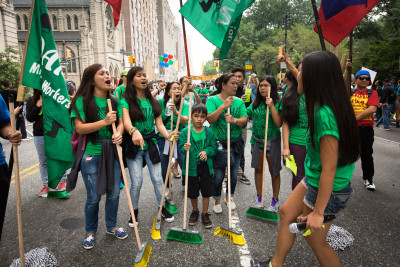 On September 21, 2014, approximately 400,000 people gathered in New York City to demand that world leaders take action to end the climate crisis. While the march was happening in New York, another 2,645 events were held in solidarity in over 150 other countries around the world. 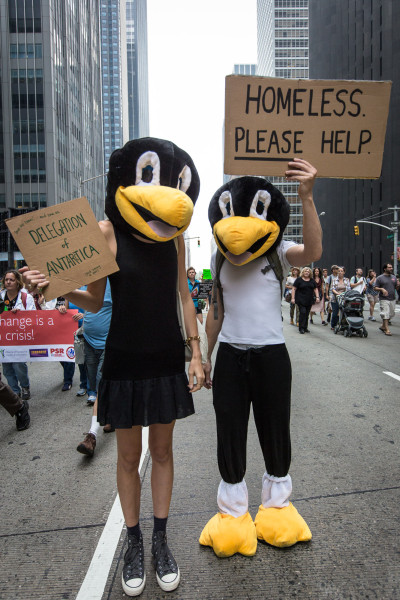 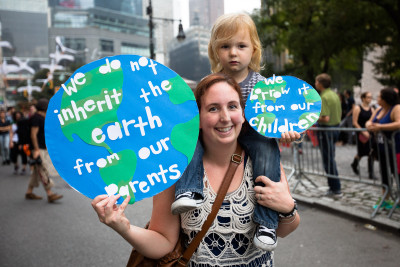 From newborn babies to octogenarians, the march was filled with citizens from all generations who are concerned about the future of our planet. Many saw this March, and related events, as an important lead-up to the COP 21 (Conference of Parties) Paris Climate Conference that would be taking place the following year.

Heads of state from nearly 200 nations met in late autumn of 2015 for the Paris Climate Conference (COP21) to establish a global agreement about reducing carbon emissions to keep temperatures from rising no more than two degrees Celsius. Rob Hopkins, a founder of the grassroots organization The Transition Network, was one of many stakeholders who came to Paris during the climate talks to promote positive actions citizens can implement such as creating local currency to keep money circulating in their communities. 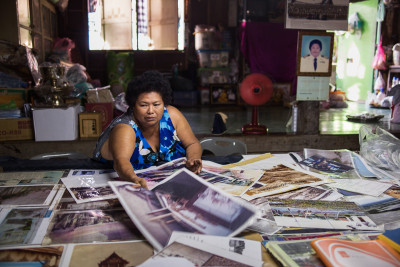 Chief Khengsamut gives presentations to all tourists who visit their village to educate them about the impacts of sea level rise and the resulting erosion of their land. Rising seas have forced villagers to move their homes further inland four or five times in the last few decades, but now they are running out of space to move. 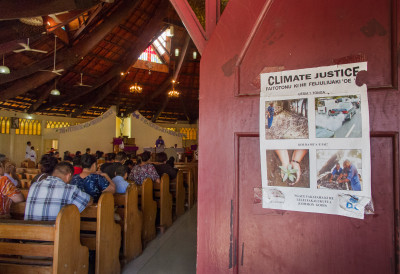 “Climate Justice” sign on door at the Basilica of Saint Anthony of Padua, Nuku’alofa, Tonga, 2012

Even though citizens of developing nations like Tonga have a much smaller footprint than those of industrialized societies, parishioners at this Catholic church are still encouraged to minimize their carbon usage. Pope Francis’ 2015 encyclical on climate change asked people of all faiths, not just Catholics, to wake up to the reality of climate change: “We are not faced with two separate crises, one environmental and the other social, but rather one complex crisis which is both social and environmental.”

Many communities around the world are trying to come up with ways to protect their valuable real estate from severe storms and flooding. But many of these “solutions,” such as creating or reinforcing dunes, re-nourishing beaches, or raising homes, are only temporary fixes that may easily be damaged again by the next powerful hurricane or storm surge. 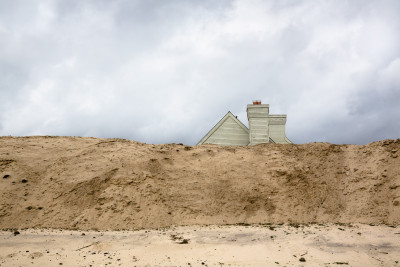 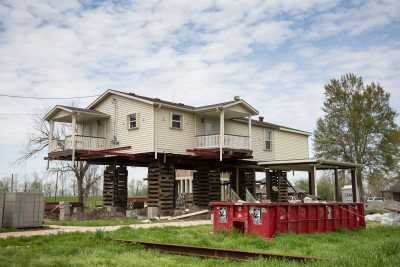 I returned to Plaquemines Parish in New Orleans two and a half years after Hurricane Isaac devastated this community in 2012. I noticed some of the homes were being raised up on stilts while others were not. According to new flood policies by FEMA (Federal Emergency Management Agency), residents here have four choices: pay $100,000 – $200,000 to elevate their homes to new standards, pay several thousand dollars for yearly flood insurance if they don’t elevate, forgo flood insurance altogether and risk losing their home to the next hurricane or flood, or move away. 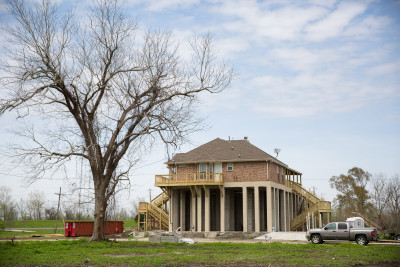 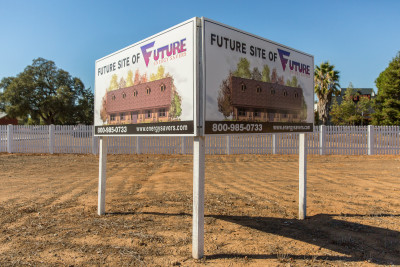 Many environmental activists have long promoted solar power as one of the best choices for renewable energy. According to a March 2016 study by the Solar Energy Industries Association solar power is expected to more than double this year in the United States.

To coincide with the People’s Climate March in September 2014, I held an audience-engagement event in New York City where visitors created postcards addressing their climate concerns that were then sent to American politicians. In exchange for making a postcard, participants took home one of my Witness Tree images. 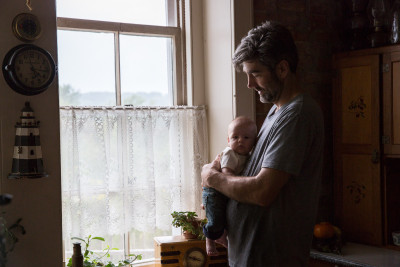 Lighthouse caretaker Patrick Landewe and his wife Anna already have a small carbon footprint since they live where they work. But their footprint is about to get even smaller as they are in the process of building a tiny houseboat. According to The Tiny Life website people choose to live in tiny houses for many reasons including “environmental concerns, financial concerns, and the desire for more time and freedom.”

In this small, mostly conservative community just south of Charleston, Bud told me that instead of talking to his neighbors about climate change (which might “shut down the conversation”), he talks to them “about the things they love – like hunting and fishing.” In that way, he gets people from many different backgrounds and viewpoints to work together to care for our shared natural resources. 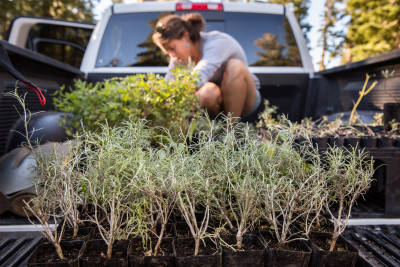 Force Majeure is a study center created in 2007 by American land artists Helen and Newton Harrison in response to global warming. Their project at Sagehen involved planting seedlings at various altitudes to see which will survive our changing climatic conditions. 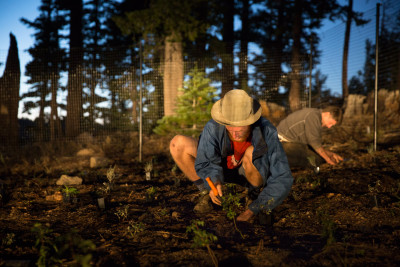 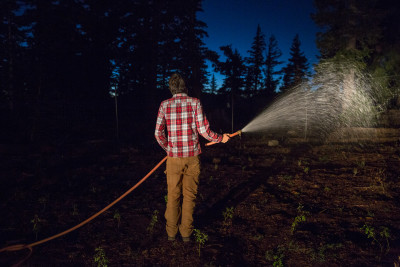 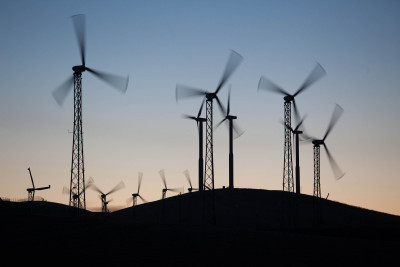 Many of these wind turbines in north-central California have been there since the 1970s after being installed in response to the energy crisis that plagued the United States during that decade. The Altamont Pass Wind Farm is still one of the largest in the U.S. and with nearly 5000 turbines, this region has one of the largest concentrations of wind turbines in the world. Many of these older models are being replaced by modern slower-moving turbines due to concerns about birds being killed by their high-speed blades. 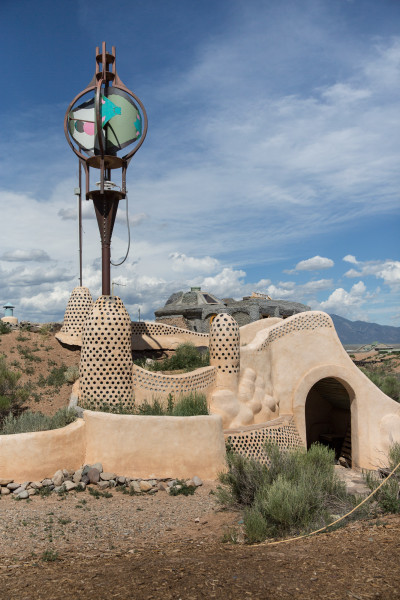 Primarily made of used tires packed tightly with earth, these Earthship homes are part of the “Greater World” community project in New Mexico. The community’s main objectives are: to reduce the economic and institutional barriers between people and sustainable housing; to begin reversing the overall negative effect that conventional housing has on the planet; and to create a less stressful existence for people in an effort to reduce the stress that they in turn place on the planet and each other 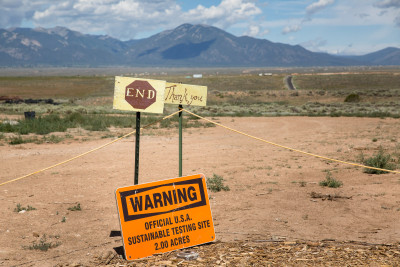