Though we’d rather not think of it, global warming is spreading across our continents with the insidious speed of horror films. Perhaps its most salient threat is this: warmer air holds more moisture. As temperatures continue to rise, this means more and more water vapor will evaporate into the atmosphere. And water vapor is the fuel for storms. While the frequency of storms may even be projected to decrease, their severity has been increasing and will continue to increase. A 2005 paper released in the journal Science reported that the amount of category 4 and 5 hurricanes had risen 80 percent since the 1980s.

As temperature differences decrease between the equator (where temperatures remain the most steady) and the poles (where they are rising fastest), water temperatures will also rise, creating conditions that are more likely to cause storms. And, as glaciers and ice sheets melt, ocean levels rise. With 44 percent of the world’s population living within 150 kilometers of the sea, the words “storm surge” and “environmental refugees” crowd our headlines, while whole populations must reconsider the course of history that led them to these shores. Unlike some environmental problems that are skewed to poorer countries, like air quality and water pollution, storms affect all. A beachfront homeowner in the Hamptons will pay through the roof for flood insurance until it’s no longer worth it; a farmer in the Amazon rainforest will suffer only so many intensified drought and flood cycles before he quits and leaves – but for where? The true cost of storms comes when we transform our lives to live defensively: to construct billions of dollars of tidal guards, to spend taxpayer money to “re-nourish” our beaches, and to shudder in conditional fear when we watch the news. We may be weather makers, but we have yet to engineer ways to prevent the immense destructive quality of nature.

As I witnessed post-Sandy New Jersey, post-Isaac Louisiana, and post-monsoon Thailand, I was struck, again and again, by the power of storms to transform landscapes. I saw a large house that had been lifted from its foundation and moved across the street and a 2,000-pound burial vault that had been carried several miles by floodwaters. Where I live, in Brooklyn, I went out to survey the damage after Sandy and found yellow police tape wrapped around several trees where they had fallen and killed two young adults who were out walking their dog. Well into the next day, the tape was still stretched around the trees, blocking off the scene of the crime. 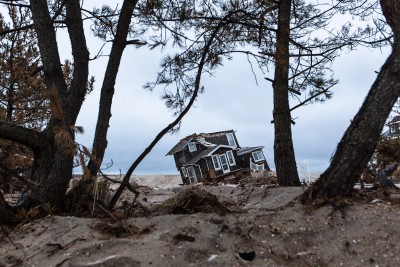 According to re-insurance firm Aon Benfield, Hurricane Sandy, at a cost of $65 billion in damages, was the costliest global disaster of 2012. Over 600,000 homes in the New Jersey and New York region were damaged by the storm. This home was one of many that were later razed. 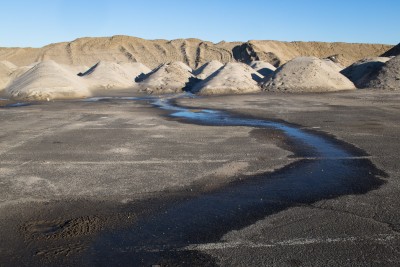 Hurricane Sandy’s storm surge caused sewage to mix with floodwater contaminating sand that washed up onto city streets from the Sea Bright beaches. Three months after the storm, a local policeman said the collected sand remained in this parking lot as the city did not yet have a place to dispose of it properly. 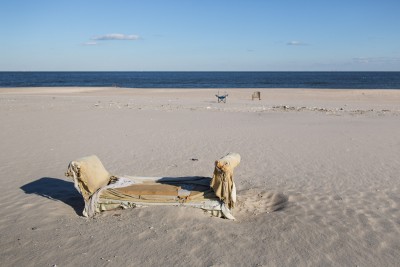 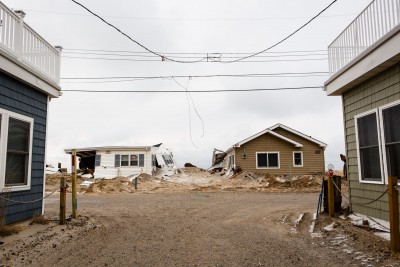 Although these cottages were torn down and then replaced with newer and larger homes, it took more than two years for many homeowners to get private insurance or FEMA money to help pay to repair or replace their storm-damaged homes. 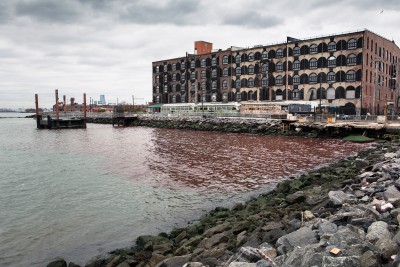 Coming upon this ominous sight near the waterfront in Red Hook, I thought the water was tainted with blood. Besides many homes, apartments, and businesses affected by Sandy’s storm surge in Red Hook, artists’ studios right by the waterfront were also damaged. The cause of this red water was powdered red pigment that washed into Red Hook Harbor when floodwater coursed though an artist’s studio. 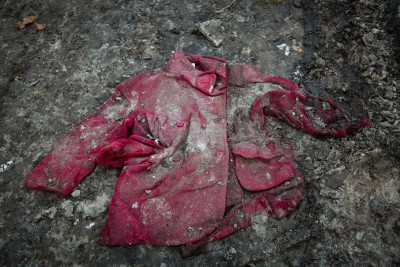 I was disheartened when I discovered this little red coat the on the sand-washed streets of Far Rockaway on the day after Hurricane Sandy destroyed hundreds of homes in this tight-knit community in Queens. 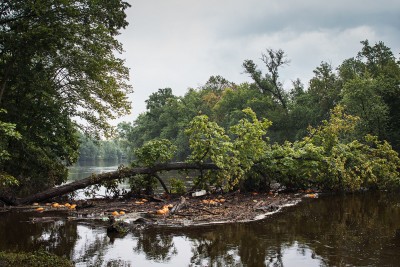 Hurricane Irene caused at least 45 deaths and more than $7.3 million in damages across the northeastern United States. These pumpkins traveled several miles down the Walkill River after being uprooted by floodwaters from their farm further upstream. 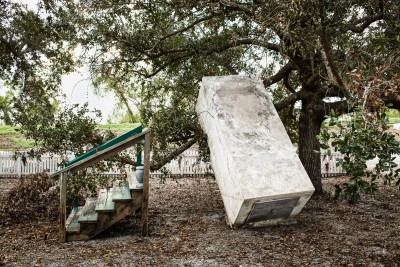 Hurricane Isaac spun into New Orleans seven years to the date after Hurricane Katrina hit the region in 2005. As a result of flooding, this 2000-pound burial vault was carried over two miles from its cemetery and deposited in a front yard along with stairs from a neighbor’s home.

Hurricane Isaac lingered over the New Orleans region, dumping nearly 20 inches of rain in less than 24 hours in some areas. Although it was only a category 1 hurricane, the storm was directly responsible for 34 deaths: 24 in Haiti, five in the Dominican Republic and five in the United States. 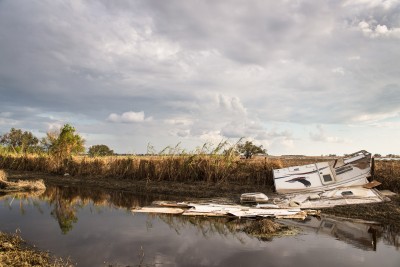 Despite the $14 billion spent on shoring up the levies of New Orleans after Hurricane Katrina, many homes, crops and cattle were lost or damaged by Isaac in Plaquemines the city’s southernmost parish, due to an unusually strong storm surge, heavy rains, and flooding of the Mississippi River and nearby marshes.

When I asked Indians I met in the Amazon about ways they noticed the climate changing, some mentioned an increase in pests such as ants and mosquitos as well as an increase in malaria and dengue that are spread by the latter. A few also noted that winter storms are getting heavier and arriving up to two months early, often hindering the planting of crops.

Traveling on the Rio Negro, I saw firsthand how important this river is to the local Indian communities for transportation, fishing, and bathing. Although Indians noted an increase in extreme storms, in 2005 and 2010 there were severe droughts that dried up most of the Rio Negro and Rio Solimoes halting transport of people, food, and other vital goods. Scientists have linked these droughts to continuing deforestation and global warming.

In 2011, Thailand experienced some of its worst flooding in over half a century due to unusually heavy monsoon rains that drenched Southeast Asia from July through October. This temple, Wat Lahan, was badly damaged. When I asked one of the monks his thoughts about climate change, he said, “No one person can fight it alone. Everyone must work together to solve this problem.”

In 2011, the worst flooding in over fifty years affected over 13 million Thai people: at least 657 were killed, approximately 96,000 homes were damaged and over 2,300 were completely destroyed. Tourism was sharply reduced by 3.2 million tourists and unemployment rose as factories were unable to open. The World Bank estimates the total cost of damages at over 1,400 billion Thai bhat ($45 billion US dollars). 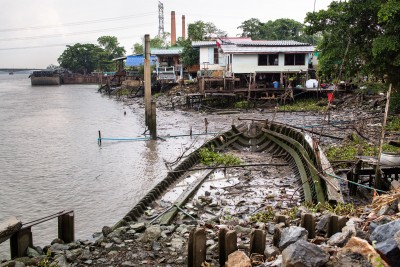 This massive pile of trash in a town just north of Bangkok, built-up slowly as people returned to their homes and sorted through personal items. Mr. Apatat, a taxi driver who gave me a tour of flood-damaged areas, said when he finally arrived home after being evacuated for more than a month, “it smelled like a garbage truck.” He estimates he lost more than 50,000 Thai bhat ($1400 US dollars) in income from the weeks he couldn’t drive. 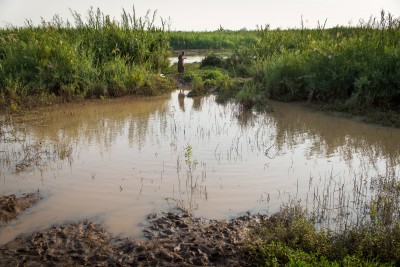 Flooding is not new to this region of Western Kenya, but as droughts get more severe, when heavy rains come the water cannot be absorbed into the ground resulting in widespread flooding. In December 2011, floods displaced over 40,000 people in this region, raising fears about a possible cholera outbreak. Although this field was flooded three months before my visit, the water had still not receded. Villagers were forced to wade through the muddy water to collect fresh river water for cooking and bathing. 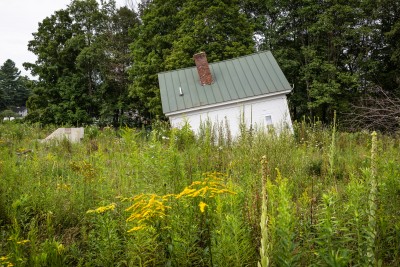 House dislodged from its foundation by Hurricane Irene floodwaters in 2011, Pittsfield, Vermont, USA, 2013

Hurricane Irene’s heavy rains and widespread flooding caused over 7 million homes and businesses, from New York to Vermont, to lose power. After the storm, a “Vermont Flooding” Facebook page was established as a place for residents to check and share information on weather and road conditions as well as post their flood-related photos and video. The page, which is still tracking the state’s floods, has over 23,000 Facebook “Likes.” 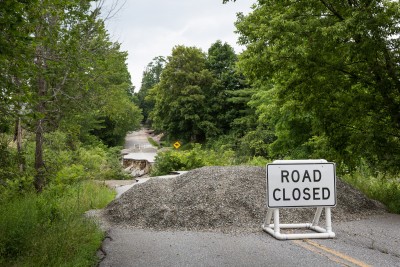 While I was looking for lingering signs of damage from Hurricane Irene, I came across homes and roads that had been damaged by recent summer storms and flooding. According to the Vermont Agency of Natural Resources “Climate Change Team,” instances of heavy rainstorms and flooding are on the rise in the state. For residents who live in flood zones, insurance rates are also rising. 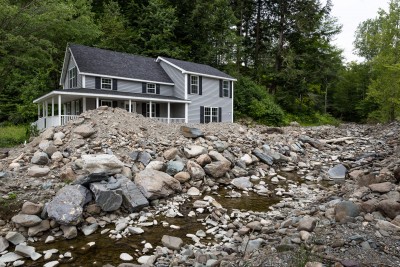 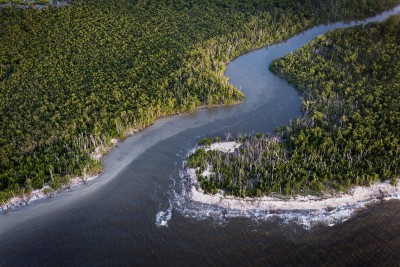 Climate change often delivers a “one-two punch.” Several of the photos from this project could be placed in at least two of the portfolio chapters. Sea level rise is causing die-off of white and black mangroves in interior sections of the Everglades and recent hurricanes and storm surges have damaged the red mangroves that line the coast.

This is another photo that could fit into two different portfolios: Dixon’s Apple Orchard was first damaged in June 2011 by the devastating Cochiti Fire, and two months later, heavy rains created flash floods which wiped out the owners’ home and most of the orchard’s apple trees.